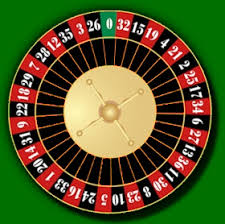 Along with Blackjackand Craps, Roulette ranks as one of the most played table games at any casino. It involves players placing their bets on a table that includes various wagering areas; a Roulette wheel, which is spun once all bets are made; and a ball, which is placed in the spinning wheel and eventually comes to rest on a number, which is also associated with either the color black or red.

The European Roulette wheel has 36 numbers plus a 0, while American Roulette offers 36 numbers, a 0 and a 00. A player may make various types of bets, including placing wagers on individual numbers (straight bet); betting on 2 adjoining numbers (split), on 3numbers on a horizontal line (street), on 4 in a square (corner), etc. They may also bet on either black or red and on either odd or even outcomes. Single bets pay the best odds, 35-1. After the wheel is spun and the winning number and color determined, all bets that win are paid and all losing bets are cleared and another round of wagering begins.

If you love playing the exciting casino game of online Roulette, you’re going to want to play in a manner that gives you the best chance of winning. At Bonus Bunker we understand that Roulette is a game of chance, which means that each spin of the wheel is independent of any other spin, and there is no logical manner to determine which number will come up next. Like all computerized casino games, a random number generator (RNG) determines the result of each spin of the roulette wheel. As an example, if the number 22 comes up on a turn, it may come up again or it may not come up again on the very next spin of the wheel. Or if after ten turns, the number 8 has not been hit, there’s not an increased chance that is will come up on the 11th, 15th or 50th spin. Due to this fact, it’s impossible to devise a real strategy for winning at online Roulette. However there are actions thatplayers can take that will give them a better house edge and will also increase the likelihood of their winning on a given turn.

Roulette Systems and the Gambler’s Fallacy

There are various “systems” that are said to work with Roulette, however most of these are based on the Gambler’s Fallacy. The Gambler’s Fallacy works on the mistaken belief that one result of an independent action can influence another result of an independent action. An example of the Gambler’s Fallacy is the belief that if you flip a coin and it comes up heads, there is a better than 50% chance that on the next flip it will be tails. If the second flip results in the coin landing heads up, then according to the fallacy there’s an even greater chance that the next flip will be a tail. But each time you flip the coin, the next result has nothing to do with the last or any other. One flip does not influence the next. Thus, systems such as the Martingale,Fibonacci, D’Alembert and others embrace the Gambler’s Fallacy. When you play one of these systems they may or may not work, but if they do result in your making a profit, it has nothing to do with an actual system working and everything to do with chance.

Bonus Bunker has collected a few quick playing tips that will help lower your risk a bit while allowing you to play a little longer.

Set strict limits as to when you will quick playing. These should include limits regarding how much you may win and lose. With these tips in mind, we have put together two online Roulette methods that can increase your chances of taking home some cash.

Placing five bets at a time can give you more chances of winning. In this scenario, you will put down one single number bet, one split wager, one six line bet and two corner bets. The single number bet pays 35-1, the split bet, which is on two adjoining numbers, offers 17-1 and the six line is good for 5-1. Each of the corner wagers will offer 8-1 odds. If you place one chip on each and hit any, you will either win money or basically break even. Note, you are not placing one unit but one chip on each wager. As an example, if you have a bankroll worth $100.00, then your unit bet would be $5.00. You would then break that $5.00 into five $1.00 bets, placing 1/5th of a unit ($1.00) on each number or combination of numbers. If you win the six line bet do not increase the amount you wager. If you win any other bets, double your wager on the next spin but only on the bet you won. Thus, if you win, you would bet a total of six chips. If you lose, then go back to your original wager.

In Roulette bets that offer even odds give you a good chance of winning some cash. Although these may not be as exciting as the combination method of wagering, they do come with relatively little risk. With this method, you’ll bet no more than one unit on a Roulette wager that carries even odds. These bets are red or black, odd or even and 1-18 or 19-36. Keep the bet the same each time. Note, betting on 1-18 or 19-36 carries a greater risk, since 0 could come up, resulting in your winning nothing. Thus, the other two wagers are preferred.

Payout Odds Are Not Real Odds

It is important to realize that casinos never offer real odds when it comes to paying you cash. This is true for online Roulette and any other game. As an example, the real odds of your hitting a single number bet are 37-1 but the casino only pays 35-1. When it comes to bets that pay even odds, the real odds of hitting the wager are 1.111-1. Why won’t a casino pay real odds? In essence, it’s their way of collecting their commission.

As you attempt to beat the spinning, hypnotic roulette wheel, Bonus Bunker wants you to be sure to play within your limits and to place conservative bets. Know when to stop playing. If you find yourself ahead, you should walk away with a profit. If you don’t, eventually the wheel will take back all that you won and then some. Be a smart Roulette player and have fun.